Treasures of Egypt with Airfare 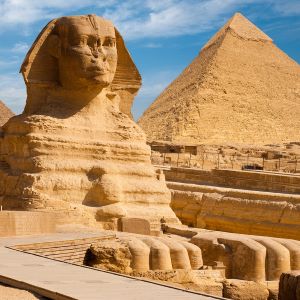 Treasures of Egypt with Airfare

Witness the Giza pyramids, the Egyptian Museum and Khan el-Khalili bazaar on a full-day private guided tour of Cairo. See the ancient pyramids and Sphinx at el-Giza and discover the mysteries that surround these age-old monuments. Visit the Egyptian Museum to see the treasures of Tutankhamun, including his gold death mask and coffins. Then spend time at the colorful Khan el-Khalili bazaar to barter for bargains. See some of Egypt’s lesser-known pyramids on a private day trip from Cairo and hear about the ancient pharaohs and their burial grounds from your guide as you journey south to the necropolis of Dahshur. View the Red Pyramid and Bent Pyramid and explore the ruins of Memphis, once Egypt’s capital. Inspect the broken relics, columns and giant fallen statue of Ramses II, before continuing to Saqqara to see the famous Step Pyramid of Zoser, Egypt’s oldest stone structure, before returning to Cairo.